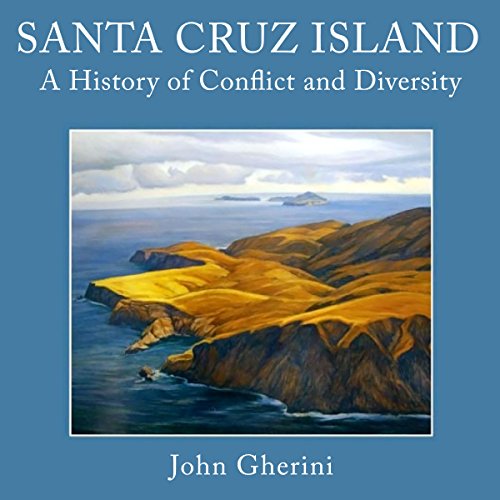 Just 22 miles off the California coast, Santa Cruz Island lies waiting. Seemingly frozen in time, it’s undeveloped, offering plenty of natural beauty and coastline to explore by boat. This book Santa Cruz Island A History of Conflict and Diversity by John Gherini, a descendant of Santa Cruz Island’s Caire family, is a wonderfully detailed island history. Complete with historic photographs, maps and illustrations, it offers us a deeper understanding of Santa Cruz island and its secrets.

Gherini writes “Any history of Santa Cruz Island would not be complete without a glimpse of the sophisticated Native American traditions that were present there as far back as 8000 B.C.” For us, some truly enjoyable parts of this book are the stories of Chumash Indians living on the island. It’s fascinating to read about how they lived, their canoes (called tomol) and the many artifacts they left behind which are still being discovered today.

The Spanish Arrive in The Channel Islands

Eventually the Spanish arrived, discovering Santa Cruz and the rest of the Channel Islands. Reading the story tells of how the Spanish met the Chumash Indians, as well as the famous explorer Juan Rodriguez Cabrillo and his mysterious death. The author John Gherini explains how the Chumash Indians continued to live on the island during Spanish rule, and their sad eventual decline and departure.

From 1800 to present day Santa Cruz Island has changed hands many times and been the site of many business enterprises. These stories are well documented and explained, and the bulk of this book records Santa Cruz Island’s owners, families and modern day history. A smugglers’ hideout, sheep and cattle ranches, a winery, adventure tours and the Pelican Bay Resort are just some of the island’s past. Whomever tried to develop Santa Cruz Island has always been met with considerable challenges. “The modern history of the island would witness the passion to own it, to protect it, to use it and to fight over it.”

One highlight of this book is the collection of historic images. Photos of the island’s various owners William E. Barron, Justinian Caire, The Gherini Family and their ranch are included. Also inside are photos of the old Pelican Bay Resort, winery buildings at the main ranch, aerial views of the island and the island survey party from 1923-1924.
It’s an impressive offering of photos from the author John Gherini’s personal collection.

Today, the island’s ownership is split between the National Park Service which owns the east 24 percent, and the Nature Conservancy owning the western 76 percent. We enjoyed reading about the beginnings of Channel Islands National Park in the 1960s and how Santa Cruz Island eventually became a part of it. But like the rest of the island’s modern history, this was also full of conflict and challenges with the Gherini family, the last remaining family owners of the island’s east end.

If you’d like to visit Santa Cruz Island or learn about its history, we haven’t found a better resource than this. This book offers more detail and fascinating stories than any other we’ve found, which for sailors like us can make for a more rewarding trip. You can buy Santa Cruz Island A History of Conflict and Diversity by John Gherini on Amazon.