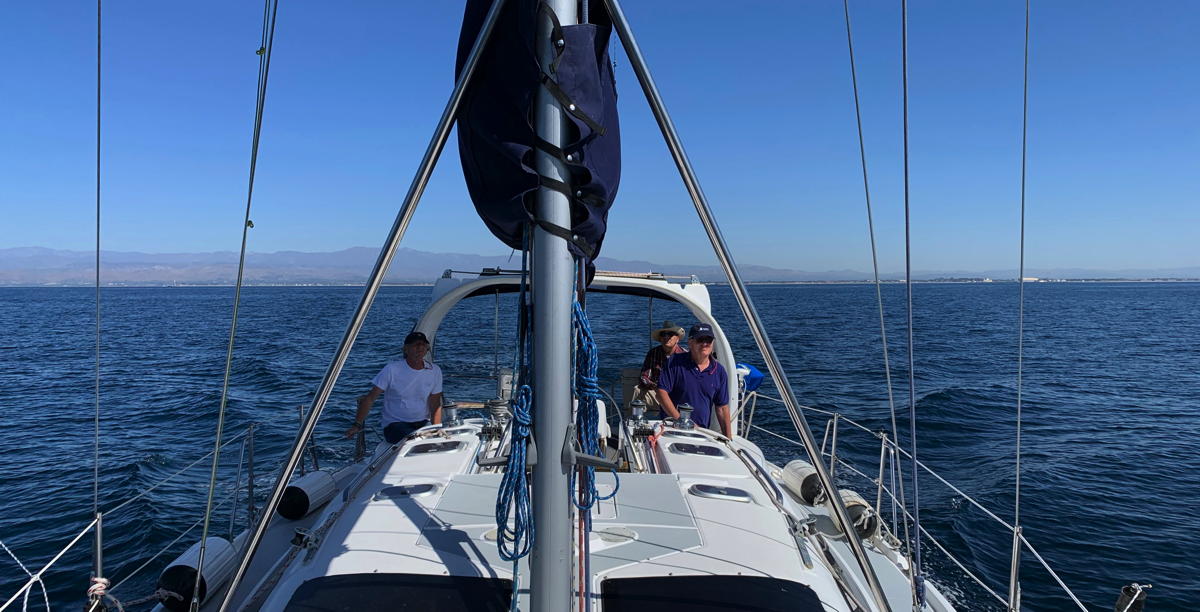 Every year it seems like during the last week of September, the light suddenly changes. The shadows get longer, the daylight a bit more red and then fall is upon us. I’ve never lived anywhere else, so I can say for sure this is definitely a pattern. For sailing, fall means the end of the crowds and we still enjoy warm weather. But the infamous California wildfires and strong winds can be a major concern.

If we plan to sail during October in Southern California we have to watch the weather forecast for Santa Ana winds. These are incredibly strong northeast winds that blow hot air from the inland valleys out over the ocean. This can be really dangerous if you’re moored at Catalina or anchored at Santa Cruz island.

Most of the time the wind blows from the northwest along the coast, but occasionally we get a high pressure system inland that can cause strong Santa Ana winds gusting up to 60 knots. From September to January the Santa Ana winds occur more frequently. There’s really great information about Santa Ana winds and other local weather phenomenon in Brian Fagan’s excellent Cruising Guide to Central and Southern California.

Channel Islands Daysail on Lucky US

Last Saturday we were worried that the Santa Ana winds wouldn’t quit and we’d have to cancel our sail, but fortunately they stopped just in time. We left out of Channel Islands harbor in Oxnard on Lucky US, a 38′ Hunter. But there was a lull in the weather as the shift from Santa Ana back to normal occurred, and the wind was totally dead. We still enjoyed ourselves, as It was a bright and beautiful clear day with no wind and we motored all day.

Marina Del Rey – We Got Wind!

Sunday the wind was back again and we had a really spectacular time sailing Aether the 32′ Catalina in Marina Del Rey. We left from the MDR North entrance and sailed up towards Malibu, and then south to El Segundo. Heading back into the south entrance we jibed back and forth down wind and we sailed wing on wing for a bit. For some reason these days all the dolphins have been out and jumping all around the boats. Its always fantastic to see them. I never get tired of the wildlife in Santa Monica Bay.

Sailing out of Redondo Beach

Yesterday we had a daysail out of Redondo Beach on Tamara, a Catalina 30′. Redondo harbor is so laid back I really like the vibe there. And it’s a compact harbor so you can get out to sea much faster than in Marina Del Rey. Our sailboat Tamara did very well. She was so light that we sailed with a reef in the main and only half the jib out all day, but we still were hitting 6-7 knots at times.

These were the first three sails of the fall season. I love these group daysails because you never know who’s going to show up. We had a really good crew each time. I hope to sail with all of you again soon!

Are you doing much fall sailing this year? Leave a comment below and share your story. As always your email address will remain private. Only your name will be displayed.